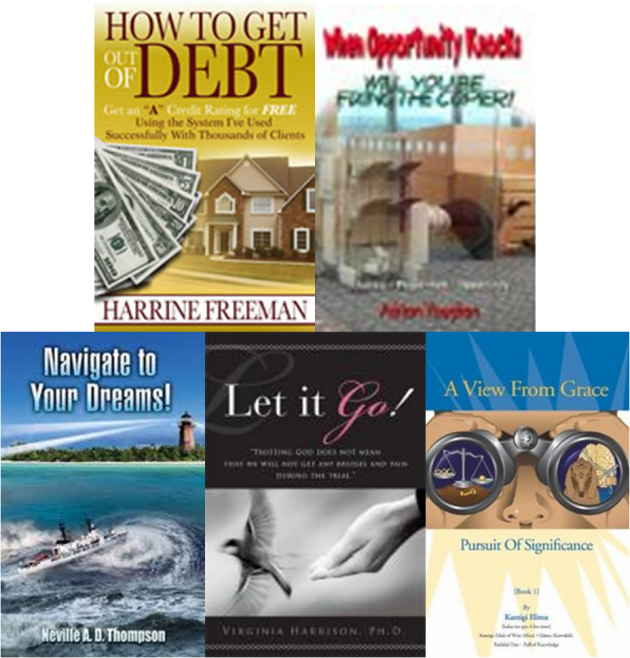 What happens in Boston does not stay in Boston! At least not if you’re mixing and mingling with the authors that we found gathered in the beautiful, historic city of Boston.  Plus, how can get a sneak peak at the nation’s first public library and not tell your friends?  It’s like heaven on earth!

Here’s what’s in store on this BIG show:

Are you ready to get out of debt? Then, tune in with credit professional Harrine Freeman, author of How to Get out of Debt: Get an “A” Credit Rating for Free.  This money manager as appeared in Forbes, the Wall Street Journal,  and Essence magazines and has dispensed advice on the Fox, ABC and NBC television networks.

When Opportunity Knocks, Will You be Fixing the Copier?  Are you an administrative professional? If the answer to both of those questions is “yes,” then author Adrian Vaughan has some secrets to success for you so that you can answer opportunity’s door!

Do you ever feel like you’re drifting on a calm sea to nowhere or being roughed up by waves of disappointing moves? In Navigate to Your Dreams, motivational speaker and Distinguished Toastmaster  Neville Thompson shares a “Five F Formula” to direct your professional and personal life so that your dreams do not become seasick nightmares.

What happens when some of the most powerful people gather in one place and give you the most amazing success principles? A View from Grace: Pursuit of Significance happens and Keith Shoates, writing under the pen name, Kantigi Elimu, brought them together.  With his beginning as an orphan, his ending as a successful military officer, electrical engineer and motivational speaker shows that the beginning of the pursuit does not determine the end.

And for a special treat:

Do you need a hero?  Well, Buddy Orange suggests that you check out your own “heroic DNA.”  His new book, I Need a Hero: How to Tap  into the Hero Within, is set for a Fall release and challenges you to look for the greatness within it and overcome the limiting beliefs that lead to your limiting behaviors.